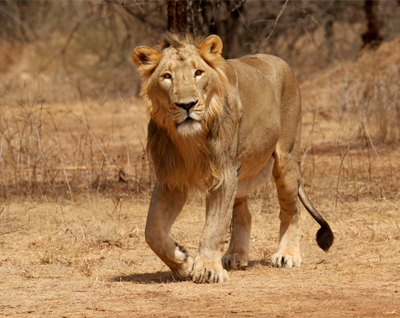 Sasan Gir National Park is an only abode of the endangered Asiatic Lions for which wildlife enthusiasts love to visit this park in time and again. Located in around 65 kms away from Junagarh, this park has become a hot visiting spot for many nature lovers, wildlife lovers and explorers belonging to various countries of the world. Founded in 1965, the Gir sanctuary is built in 1412 sqkms area in the Saurastra region, today, it has become prime visiting destination of millions of travellers.

Although, this park accommodates numerous wildlife species, yet the Asiatic Lions are the main creature who attracts the maximum visitors to this place. The Asiatic Lions are known as the most endangered species in the world and for this reason, many hunters and researchers from varied corners of the world love touring around Sasan Gir Sanctuary as it is a place where they can see these lions in their natural habitat. As this place features a rich biodiversity, it has gained a consistent ecosystem with 606 plan species, 36 mammals, more than 300 birds’ species and 2000 insects species. A large area of this sanctuary is covered with dry deciduous forest which holds a significant position to keep the whole climate of Gir moderate. With such qualities, Gir has become an integral part of Gujarat tourism today.

The restricted area of the Sasan Gir National Park remains closed from the mid of June to mid of October each year. This is a time when monsoon arrives here. Subsequently, the time between December month to March is ideal to plan your tour to Gir due to the best climatic conditions. However, From April to May months, the climate becomes too hot, yet referred as an ideal time for all nature lovers and wildlife lovers.

The Sasan Gir National Park is built at 65 kms away from Junagarh and also 40 kms away from Veraval railway station. The park is flawlessly linked to big cities of Gujarat like Ahmedabad via road as well as rail. Though the ideal accessibility route to reach Gir from Ahmedabad is via road as it takes just 7 hours of time to reach. The closest airport to this park is Keshod that is 38 kms and Rajkot from and to which you can easily find flights from Mumbai.

There are numerous accommodation options available for vacationers to stay in during their tour in Gir. You can find a variety of accommodation options ranging from budget hotels to luxury resorts to make your tour more satisfying. The Gir forest department also runs two famous lodges in Gir which include the Gir Lodge and the SinhSadan Forest Lodge. In addition to these lodges, there are many privately running lodges available near SasanGir National Park.